The evening opened with a welcome to Judges Robert Coppa and Ben Kopilow (Images) and Hilary Waudhaugh (Books) who selected the following awards.

There were 25 colour and 11 mono print entries.

Book of the Year (Hilary)

This award is for the best Photobook or paper-based book-like project entered as part of the Images of the Year competitions. Photobooks should be based on photographs taken by the author.

There were 19 entries in this category

The following awards are made on the recommendation of the awards panel, which this year was Helen McFadden, Ian Marshall and Marwan El Hassan. No panel member was considered for an award to avoid conflicts of interest. The panel called for nominations for the following awards and members could nominate others or themselves.

Photo Project of the Year Award

This award is to be made to the best photography-based project conducted during the year. The aim of this award is to recognise members who pursue photography creatively and who achieve a significant outcome with photography. A “project” is loosely defined, but can include an exhibition, a series of lectures, a presentation, a new activity or some project that involves photography and a tangible outcome. Examples could be a personal exhibition or participation in a group exhibition where the photographic contribution of the member is significant. It could also be production of a magazine or electronic book, a website or a community activity involving photography. While this project could be focused on the member’s own photography, we also aim to reward projects that involve the work of other photographer(s) either wholly or in part, such as a community event, group exhibition or publication. Where the photography is not the members’ own work, the contribution of the member to the group activity should demonstrate creativity and be significant.

Murray Foote for his travel blog in which he has systematically documented his travels over many parts of the globe and over many years. This blog has many followers and is a great source of information for photographers looking to go to interesting places on the road less travelled.

Andrée Lawrey for the development of her new restrained and elegant photography website.

Judy Parker for her set of prints “Project to Print” which collates all her winning entries from CPS Projected Image Portfolio Competitions held over the years and presents them as a coherent boxed set of prints.

Eva van Gorsel for her Instagram Project of 100 images that led to being an invited participant in Ovation, an exhibition and market held by the Canberra RAW Artists at the Albert Hall in August.

Grant Winkler for his project on the deserted streets of Brindabella Park that formed part of the Personal Projects exhibition at PhotoAccess.

The award honours the memory of former CPS member, Russell Hunt. It seeks to recognise exceptional, sustained service to the society. The award is to be made to a member who has demonstrated leadership, creativity and commitment in the development and delivery of the Canberra Photographic Society program.

These awards are made at the President’s discretion (on recommendation of the Awards Panel) to reward exceptional service or outstanding photographic contributions to the Society.

Alan Charlton for the reliable and consistent logistics support that underpins all our meetings – that’s at least three per month – four if you include the committee meetings. Alan has served on the committee for several years. He undertakes a significant workload in hanging our external showcases. It is no exaggeration to say the without Alan, they would not have made it on to the wall.

Andrée Lawrey for her ongoing commitment to the support of our external showcases by participating in selection panels and in the curation and hanging teams over several years. Andrée is also convenor and leader of the Personal Projects group that provides guidance and encouragement to those seeking to develop their photographic practice by pursuing a project and seeing it to completion.

Judy Parker, a previous winner of the Russell Hunt award, continues to provide the backbone for our external showcases. This workload has increased over the years as we now run two exhibitions a year and now run selection procedures for each. In addition, Judy helps newer members with printing and frequently prints a lot of the material in our external showcases. She is also the primary coordinator of the print display at our monthly Expo nights.

Michael Taylor for several years of committee service, particularly as Treasurer. In this role he has streamlined our procedures and has improved our membership and financial  records procedures. Michael has also led our Workshop evenings that provide support to newer members in an informal atmosphere.

Winners: This year the panel recommended the award of President’s Medals for service to

The Russell Hunt award goes to:

Photographer of the Year Award

In order that sustained excellence within the Society also be appropriately recognised, the panel sought to ensure that members who have achieved excellence in society activities were considered for an award. This is something that has been done as long as I have been a member of the CPS and it is now a routine part of panel deliberations. While we no longer run an aggregate competition, the panel looked at and sought to reward excellence in Expo night scores, Portfolio Competitions and selection of images for our external showcases (Different Views at Telstra Tower and The Natural World at CSIRO Discovery).

Nominations for Photographer of the Year Award

Tony Brown. Tony achieved the highest number of fives at Expo nights and was awarded the most Images of the night in 2018. He also participated in the Natural World exhibition and sold one of his exhibited images. Tony received several bronze awards in the international 2018 Epson Pano Awards and 6 Silver and 8 Bronze Awards at the from the Focus Awards (An Australian Landscape photography competition with over 2000 entrants and over $35,000 in prizes). One of the Silver images placed 3rd in the Sunrise/Sunset category in the Focus Awards.

Murray Foote. Murray was (very) close behind Tony in the number of fives and images of the night at Expo nights (These two were well ahead of the rest of the pack). He is also a regular contributor to our external showcases: this year was no exception. Murray won a (joint) Photo Project of the Year award for his photoblog. Earlier this year he held an exhibition of his music-based work at Smith’s Alternative Bookshop.

Brian Jones. Brian won the Projected Image Portfolio Award and was awarded one Image of the Night. Brian contributed to our external showcases and has excelled in external international competitions with images recognised in the 11th Pollux Awards, the 11th International Color Awards, the 13th Spider Awards, Wildlife Photographer of the Year and the 5th Biennial of Fine Art and Documentary Photography in Barcelona. Brian gave two lectures to the U3A photography group.

Judy Parker. Judy continues to demonstrate photographic excellence, particularly with success in CPS Portfolio Awards (2 x HCs). This evening she has won the Monochrome Print of the Year Award and also been awarded a Highly Commended for a Monochrome Print. She is also joint winner of the Photo Project of the Year.

Eva van Gorsel. Eva has shown remarkable growth as a photographer this year and has backed up a solid performance at Expo nights with a Highly Commended in the Projected Portfolio Awards and in her performance this evening where she achieved Winner and HC in Colour Print of the Year and also won the Book of the Year award. She had the greatest number of images accepted for “The Natural World” showcase and was nominated for the Photo Project of the Year.

Robin Yong. Robin is unusual in that he processes his images on his iPad and doesn’t own a camera system. This year he was admitted as professional member of AIPP and won several APPAs including a silver. Robin’s photography is also widely awarded in significant International Competitions in places such as Tokyo, Paris, Istanbul and Sienna. Robin is a regular participant in Expo nights where he has won one Image of the Night. This evening he has been awarded two Highly Commended Awards for his prints.

Winners: This year the panel recommended the award of President’s Medals for photographic excellence to

Winner of the Photographer of the Year for 2018

Many thanks to our esteemed judges. We appreciate the time and expertise that they donate to us. Thanks also to all who helped with the IOY celebrations. A special thanks to Capital Wines for donating the wine gifts for the judges. 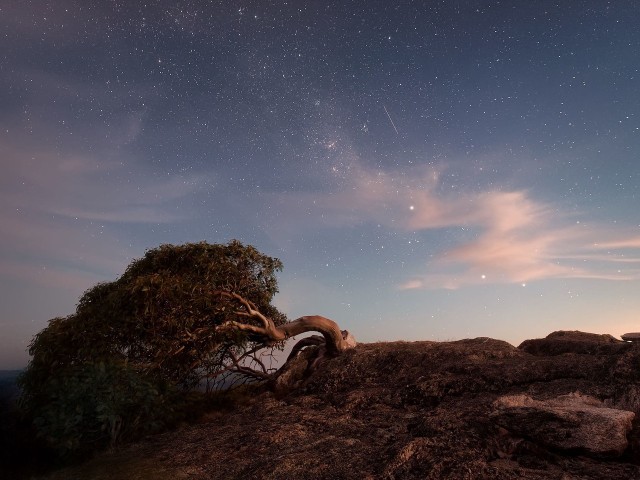 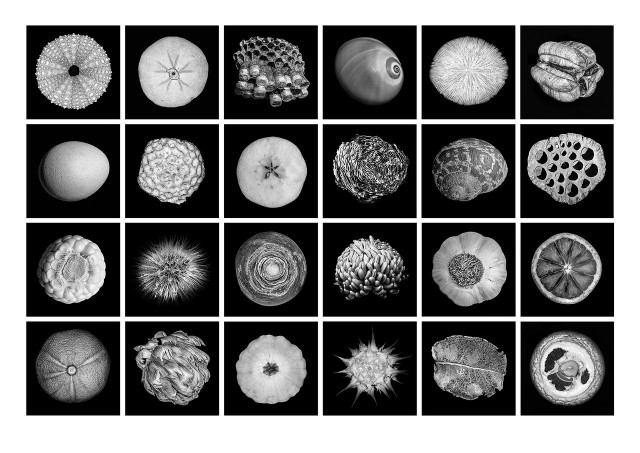 This is for Lightroom users who enter Canberra Photographic Society competitions.

If you enter a  Projected Image or a Print competition, you will need to upload digital images to the CPS Smugmug site.  In order to do that, you will first need to export to a jpeg on your local drive.  I will show you how to do that with a Lightroom export preset that is largely automated so that you only need to update the image file name.

First, select an image in the Library tab in Lightroom, 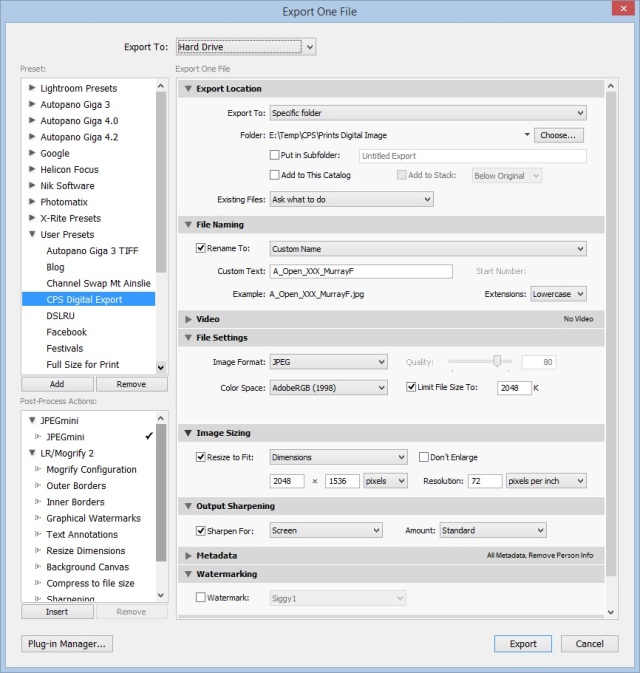 Here I have clicked on my saved preset CPS Digital Export. All I have to do now is to update the file name and then click [Export].

So how do we create the preset?  We start from a blank screen and fill it out as follows:

Now you have specified all the details; you just need to save the preset.

So now you have the preset, you don’t need to make any of those changes again apart from modifying the filename to suit.

Next time you need to export a digital file for a CPS competition:

Authors and their posts